ILS President: Too Early to Say if Launch Market is Oversaturated 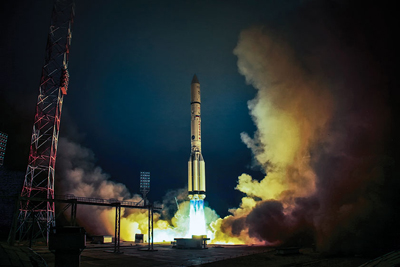 With two commercial launches completed in 2013, the satellite industry is waiting to see how the rest of the launch market will react to SpaceX’s success. Besides this new competition, the satellite launch market is not expected to have a significant growth in the next couple of years. International Launch Services (ILS) President Phil Slack says not enough time has past to really determine whether the market now has too many players competing for the same payloads as he assesses the current situation.

“It’s all going to be a factor of lift capability, heritage, reliability, schedule availability, terms and conditions, pricing — there are a lot of factors that go into that,” Slack told Via Satellite. “If you look at the last several years there really have been two dominant players within the launch industry: it’s been Arianespace and ourselves. Recently, SpaceX has been successful and they’ve had a couple of [commercial] launches, but we’ve had a very good market share traditionally.”

Demand for launches is expected to remain flat during 2014 and 2015 with roughly 20 to 22 GEO spacecraft orders per year, according to Slack. ILS has already announced two launches for 2015: Intelsat DLA 2 and Eutelsat 9B, both of which will use the Proton rocket, and a 2016 Proton launch of the Yamal 601 satellite.

ILS launched eight payloads in 2012, and seven in 2013. Though the company’s most recent year had slightly fewer launches, the Proton rocket had 10 launches overall, which is the norm. It was an “outstanding year relative to the rest of the launch market,” Slack said. ILS is looking to win five to six orders per year on the heavy side, and is planning a new approach to pursuing smaller payloads in the near future.

“About 85 percent of commercial GEO satellites have launched on Ariane and Proton over the last three years,” said Slack. “So as SpaceX comes on they will certainly provide more competition, and we will have to see what the market does. It’s really hard for us to say whether the market can support three providers or only two.”

With the rate of new satellites expected to remain stagnant, ILS is looking to other trends in order to increase its share of the market. Launching lighter satellites may be the best way, provided they can win orders to Proton over the Falcon 9.

“We do see that there could be some bifurcation of that market,” explained Slack. “What I mean by that is less spacecraft that are in the 4.5 to 5.5 metric ton range, and more that are either very heavy, or significantly lighter. We’re looking at potentially dual manifesting smaller-stack satellites on our Proton. We’ve been working with a number of customers and satellite manufacturers in that regard. One of the advantages that we have with the big lift capabilities: we can put two fairly large electric propulsion satellites, like two three metric ton satellites on a Proton, or we could put two smaller electric propulsion satellites like two Boeing 702 SPs on a Proton. Instead of launching them to GTO we could take them much closer to GSO and significantly reduce the orbit raising timeframe. We do see that as a growth area for us.”

One thing that is certain is no launch provider wants to have any weaknesses that cost sales in such a high-stakes game. In addition to looking at new markets, ILS is also boosting its financial options for clients. The company, even with significant flight heritage, has not had the same competitive advantage when it comes to export financing.

“Arianespace has always had COFACE available for them, and recently SpaceX has been using U.S. EXIM Bank to help provide very good financing terms to their customers,” said Slack. “Russia really hasn’t had a viable solution to address that equally. However, we’ve been working with a new entity called EXIAR: Export Insurance Agency of Russia. We think that through EXIAR, we will be able to offer Russian credit guarantees, which will provide significant benefit to our customers and put us on better footing with those that are offered by COFACE and EXIM bank.”

Future launches will be more contested as the competition becomes more direct. Though ILS is primarily invested in the heavy launch sector, it will need to prevail against SpaceX if it hopes to succeed with dual manifests. Furthermore, while ILS and Sea Launch are looking downwards at smaller satellites, SpaceX is looking up at larger payloads with the Falcon Heavy. It will not take too much time before its impact can be clearly discerned.

“Proton is nearing its 50th anniversary of service with 393 launches overall to date,” said Slack. “We had five consecutive successes over the last three months of 2013, and we are very hopeful that we will have up to 12 additional launches this year both in terms of federal and commercial. If [SpaceX] continues on their streak of successes, they will be a more viable competitor, and if they are able to introduce the Falcon Heavy that could certainly be a factor in the next two years.”