ILS Proton Launch Success of Intelsat 23 to Provide Enhanced Capacity for the Americas, Europe and Africa

For more information on the launch please visit Mission Control 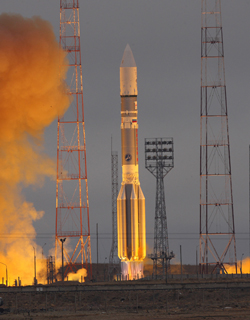 With an anticipated service life of more than 18 years, Intelsat 23 will provide enhanced capacity for enterprise, oil and gas, and data networking applications. Replacing Intelsat 707 at 307° East, the satellite will provide C-band services to customers in the Americas, Europe and Africa, and Ku-band coverage for Latin America.

ILS President Frank McKenna said, “It is an honor to celebrate our landmark 75th commercial launch with Intelsat with the successful launch of the Intelsat 23 satellite. The performance of the ILS Proton vehicle for this near geostationary orbit mission will provide expanded lifetime for the Intelsat 23 satellite. We are pleased to enable the expansion of Intelsat’s fleet and support its plans for continued growth.”

The Proton Breeze M vehicle is built by Khrunichev State Research and Space Production Center of Moscow, one of the pillars of the aerospace industry and majority owner of ILS. Proton has a heritage of 380 missions since its maiden flight in 1965. This was the 6th ILS Proton launch this year.

Built by Orbital Sciences Corporation, Intelsat 23 is the final scheduled launch for Intelsat in 2012.  Intelsat 27 is scheduled for launch in the first quarter of 2013. The launch will mark the completion of Intelsat’s global broadband mobility platform.