Following the decision of the State Review Board, the Proton M/Breeze M integrated launch vehicle (ILV) carrying the Inmarsat- 5 F3 telecommunications spacecraft was rolled out to the Launch Facility, Area 200 earlier this morning of August 25. Here, the ILV was erected vertically onto the launch table and Khrunichev together with other space-industry companies, commenced Day 1  of countdown operations.


Ground processing for the upcoming launch is proceeding on schedule. According to the Russian Federal Space Agency, the liftoff of the ILV Proton M/Breeze M with Inmarsat 5F-3 is scheduled for 28 Аugust.

The contract for using a Proton in support of the Inmarsat 5F-3 mission was concluded by International Launch Services, Inc., a Russian/U.S. company headquartered in Reston, VA. Khrunichev is the majority owner of ILS. KhSC is the designer and manufacturer of the Proton launch vehicle and Breeze-M Upper Stage upper stage booster, and also of the Angara prospective launch complex. The Inmarsat 5F3 spacecraft was manufactured by Boeing Satellite Systems International, U.S.A., on orders of the Inmarsat, U.K. satellite operator. 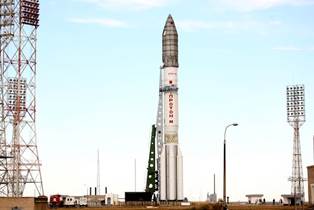