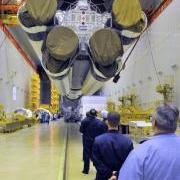 The Inmarsat 5F2 spacecraft is scheduled for launch from Baikonur on 01 February. The spacecraft (SC) liftoff mass is approximately 6MT. This will be the first Proton launch in 2015.

Ground processing for the upcoming launch is proceeding on schedule.

ILV assembly and testing at the 92-A50 Integration/Testing Facility were completed yesterday.

This morning, the Integrated Launch Vehicle (ILV) (i.e., the Proton-M launch vehicle + the Ascent Unit comprising Breeze-M Upper Stage and the Inmarsat 5F2 SC) was transferred to the fueling area.

It will take two days for the Breeze-M Upper Stage low-pressure tanks to be fueled, marking the concluding operations prior to the rollout of the rocket from to the Launch Complex.

The Proton-M ILV launch-readiness status will be ascertained by the State Commission.

The contract for using a Proton in support of the Inmarsat 5F-2 mission was concluded by International Launch Services, Inc., a Russian/U.S. company headquartered in Reston, VA.

ILS is controlled by the KhSC Space Center. KhSC is the designer and manufacturer of the Proton launch vehicle and Breeze-M Upper Stage upper stage booster, and also of the Angara prospective launch complex.

The Inmarsat 5F2 SC was manufactured by Boeing Satellite Systems, U.S.A., on orders of the Inmarsat, U.K. satellite operator, to provide communications services covering the Americas and the Atlantic region.

The Inmarsat 5F2 SC is the second of the three Inmarsat’s fifth-generation (I-5) satellites. The first I-5 satellite, Inmarsat-5F1, was successfully launched aboard the Proton launch vehicle in December, 2013.