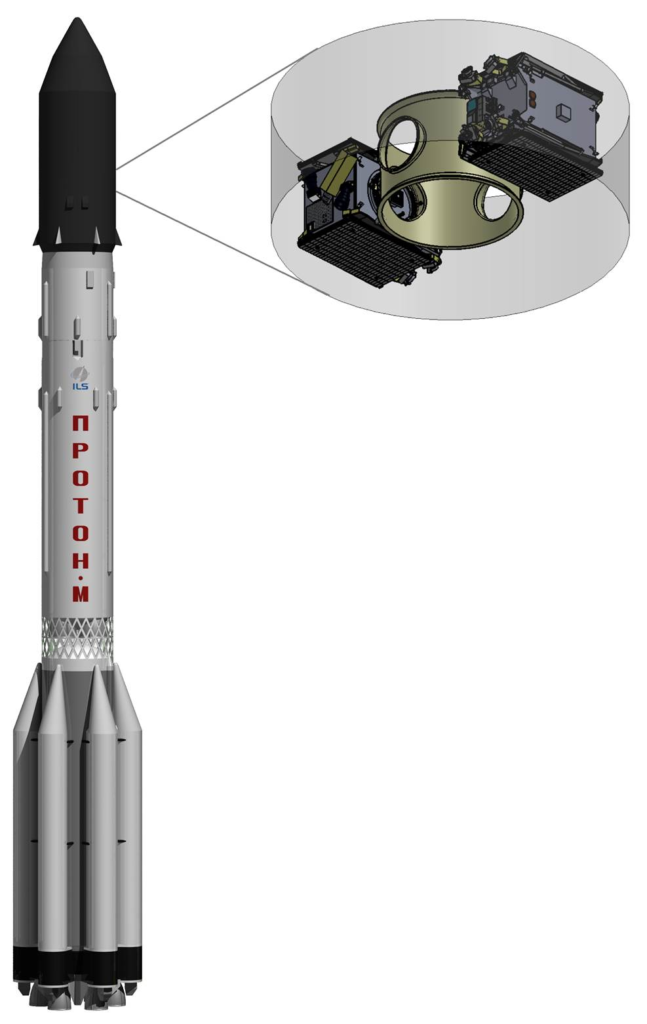 “ILS is focused on serving the satellite industry with flexible, and affordable launch solutions and our agreement with Effective Space is a perfect example of that. The performance of the Proton Breeze M vehicle to deliver the SPACE DRONE™ spacecraft directly to geostationary orbit combined with our decades-long history of launching dual or multiple spacecraft at one time, makes it a natural fit for Proton to deploy their spacecraft,” said ILS President Kirk Pysher. “This combination of performance and experience will enable Effective Space to realize their mission objective in the most expedient and effective way possible.”
The ILS Proton Breeze M vehicle with the standard 4 meter payload fairing will launch the two spacecraft into a geostationary orbit. The SPACE DRONE™ spacecraft will then use their onboard propulsion system to maneuver to their contracted life-extension mission locations, as recently announced.
The SPACE DRONE™ spacecraft is a 400-kilogram spacecraft (1m x 1m x 1.25m) that has a universal, non-intrusive docking system to rendezvous and dock to the geostationary host satellite. The SPACE DRONE™ spacecraft then uses electric propulsion to take over the station-keeping and attitude-control maneuvers of the joint stack. Missions include station-keeping, relocation, deorbiting, orbit correction, inclination correction and ‘bringing into use’ (BIU). The ILS Proton Breeze M launch will be the first deployment of Effective Space’s SPACE DRONE™ spacecraft in 2020.
Planned fleet expansion will see up to six (6) SPACE DRONE™ spacecraft being sent to orbit on an annual basis. Future phases will see SPACE DRONE™ spacecraft being launched to support low Earth orbit (LEO) constellations, Active-Debris-Removal (ADR) and other logistics in space. “Launching our first two SPACE DRONE™ spacecraft into a geostationary orbit is part of our strong commitment to our first customer, meeting mission timeline and ensuring smooth transition into a life-extension service,” said Arie Halsband, founder and CEO of Effective Space.
“Due to the attractive economics, extending existing assets in space is something that is gaining significant traction in today’s market. With that in mind, the announcement of this launch, utilizing the performance of the Proton Breeze M vehicle, is an important milestone for a rapidly developing market. ILS worked with us to arrive at a reliable, high performing, cost-effective solution for our business. We look forward to our continued work with ILS and Khrunichev to propel this exciting phase of our company forward,” said Halsband.
The Proton Breeze M vehicle has launched 416 times since its maiden launch in 1965, when it started out as a two-stage vehicle. For ILS, there have been 96 missions to date since its debut with the launch of the Astra 1F communications satellite in 1996. Proton Breeze M has a lift capability of 6.3 Metric Tons to reference GTO and over 3 Metric Tons to GSO; it has the versatility to launch single, dedicated missions as well as dual or multiple spacecraft with either the standard 4.35m payload fairing or the larger 5.2m diameter payload fairing.
About ILS
ILS is a leader in providing launch services for satellite operators and offers a complete array of services and support, from contract arrangements, mission management and on-orbit delivery. ILS markets the Proton Breeze M, Proton Medium, and Angara 1.2 launch services to commercial and government satellite operators worldwide. ILS is a U.S. company headquartered in Reston, VA., near Washington, D.C. For more information, visit www.ilslaunch.com, Twitter, Facebook, Instagram, LinkedIn, and YouTube
About Effective Space
Effective Space is pioneering last-mile logistics in space. It deploys and operates a fleet of small SPACE DRONE™ spacecraft that will deliver, position, maintain, monitor and guarantee space assets in orbit and beyond. Its ‘Phase One’ rollout is based on an existing solid business case: life-extension services to operators of satellites in geosynchronous-earth-orbit (GEO). Services include station-keeping and attitude-control, relocation, orbit and inclination correction, deorbiting and ‘bringing into use’ (BIU). The SPACE DRONE™ platform is well capable of supporting evolving low-earth (LEO) constellations, as well as active-debris removal (ADR) missions. Long-term services will also support asteroid-mining, deep space exploration and space manufacturing logistics. Effective Space is headquartered in the UK. For more information, visit http://effective.space.