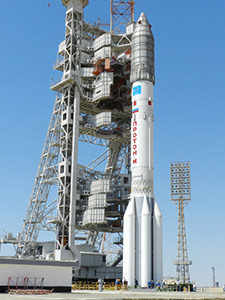 The Proton M/Express AM4R integrated launch vehicle (ILV) was rolled out to Launch Complex (LC) at 4:30 am (Moscow Time) today.

At the Launch Complex, the ILV was installed on the launch pad and erected.

ILV prelaunch processing at LC  is scheduled to be completed within three days. Today specialists from Khrunichev and other Roscosmos entities will be carrying out operations as per Countdown Day One Schedule.

Express AM4R is built by EADS Astrium for the Russian Satellite Communications Company (RSCC) under the RF Federal Space Program for 2006 – 2015. With a mass of approximately 5775 кg, the satellite is built on the Eurostar 3000 platform. It carries 63 transponeders in С-, Кu-, Ка-, and L- bands and 10 antennas to provide sustainable coverage across the entire territory of Russia and CIS.

The Express AM4R is Russia’s most powerful state-of-the-art satellite, a third Express-series asset to be launched in 2014. Earlier this year, on March 16, the Express AT1/Express AT duo was successfully orbited by a Proton Breeze M launch vehicle.