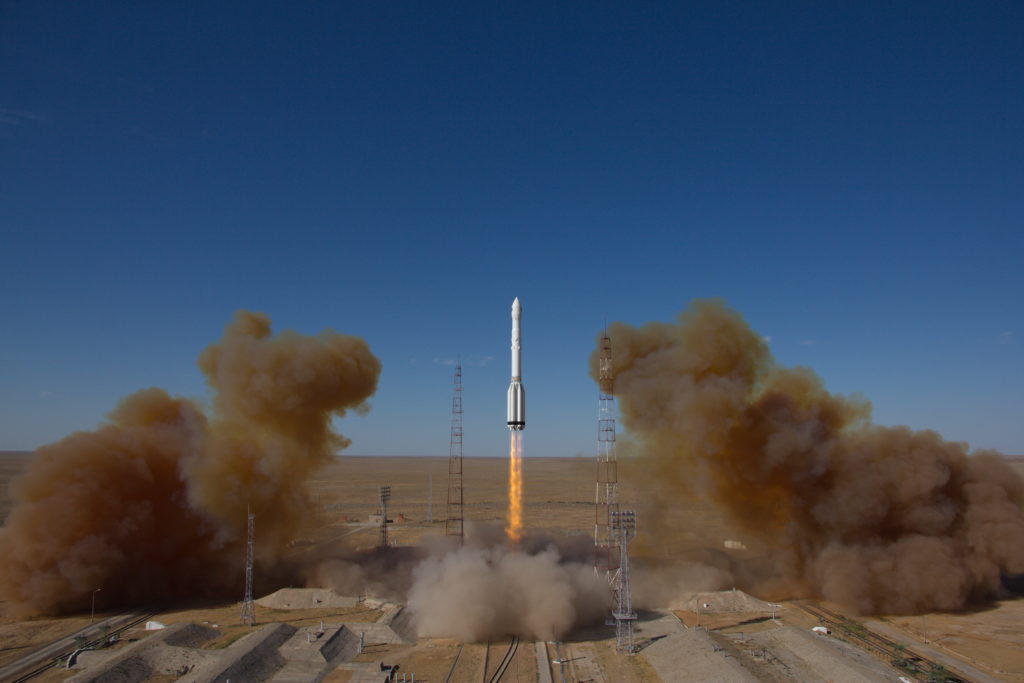 JULY 15, 2019, BAIKONUR, KAZAKHSTAN – Following is a press release from Roscosmos and Khrunichev: The Proton M launch vehicle with the Block DM-3 upper stage and the Spektr-RG astrophysical observatory was successfully launched from Site 81 of the Baikonur Cosmodrome on July 13, 2019 at 3:30:57 p.m. Moscow time. The launch and flight were completed with no issues making this the second launch of this type of vehicle in 2019.

Two hours later, at 5:30 pm Moscow time, the spacecraft was separated from the Block DM-03 and the orbital observatory began its 100-day flight towards the L2 Lagrange point between the Earth and the Sun, where it will be exploring the Universe in the X-ray wavelength range of electromagnetic emissions. All systems are operating nominally. Solar array and thermal blanket deployment were verified. Spacecraft tracking is enabled.

The following operations are scheduled during flight: support system checks, telescope alignment, calibration and testing, and preliminary astrophysical observations. The mission involves six and a half years of scientific observation, including 4 years of star scanning and 2.5 years of point observation of objects in the Universe.

The spacecraft is expected to detect 100,000 galaxy clusters in the observable part of the universe, as well as approximately 3 million accretive supermassive black holes, hundreds of thousands of stars with active coronas and accreting white dwarf stars, tens of thousands of star-forming galaxies and many other objects, including objects of unknown nature.

These data are extremely important for understanding how matter is distributed in the Universe, what role dark energy played in its development and how supermassive black holes appeared and grew.

The Spektr-RG spacecraft was developed in partnership with Germany as part of the Federal Space Program on request of the Russian Academy of Sciences. The observatory is equipped with two unique X-ray mirror telescopes, the ART-XC (made in Russia at the Russian Space Research Institute) and eROSITA (made in Germany at MPE), which comprise an oblique incidence X-ray optical system. The telescopes are mounted onto a Navigator bus (NPO Lavochkin, Russia), that was adapted to the requirements of the program.

Taking the launch of Spektr RG into account, there have been 419 launches of Proton vehicles in various configurations since Proton became operational (1965), including 106 launches of the upgraded Proton-M.