On June 9, the SES-3 (OS-2) team journeyed to Yubileiny Airfield to await the arrival of the Antonov 124 aircraft, which was delivering a precious cargo of the SES-3 (OS-2) spacecraft and several M2 containers of campaign support equipment and supplies.  The giant Antonov touched down at 14:15 in clear skies to a picture-perfect landing.  Khrunichev quickly put its skilled team in action to offload the spacecraft and cargo onto railcars.  Joining forces with ILS and Orbital,  offload was accomplished in record time – just 4 hours.

Then the final leg of the spacecraft’s journey to Khrunichev’s spacecraft processing facility commenced as the train began to rumble forward cautiously at 15 km/hr.  Upon arrival, the spacecraft was carefully lifted off the railcar with a 50 ton overhead crane, and gently touched down to await further processing.  The operation was complete at 02:15 on June 10. 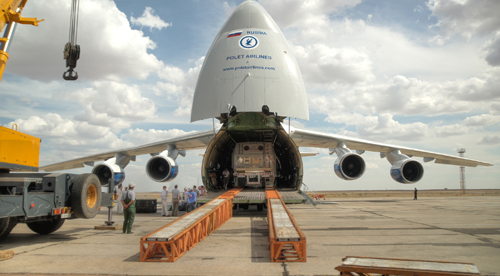