The Intelsat 23 campaign is back…and it is better than ever!

The Intelsat 23 (IS-23) campaign originally began with the early team arrival in Baikonur on June 12th, 2012.  Due to a delay, the campaign was put on hold.  Although some people were able to return home for a few weeks, there were others who stayed behind in Baikonur.  We would like to thank those at Orbital, ILS, ILS Logistics, and Pinkertons who stayed in Baikonur to hold the fort down.

After several weeks, the IS-23 campaign is finally back up and running again – and it is better than ever!  Besides the excitement of re-starting the campaign, those who arrived on October 1st were greeted with quite the surprise; they had the luxury of entering through the brand new terminal at Krainy airport!  The terminal is a great improvement to the old one and is fully equipped with bathrooms, a luggage belt, and even a lounge area.  The customer was very impressed with the new addition!

What’s next on the horizon for Baikonur, Kazakhstan?  The up-and-coming IS-23 launch, of course! 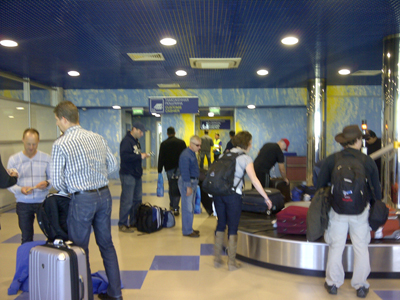