After working for so long and so hard, it paid off today when we watched the QuetzSat-1 satellite move past the ViaSat-1 satellite in Hall 103. QuetzSat-1 was on its way to joint operations, and ViaSat-1 into standalone ops. A true testament to the hard work by International Launch Services (ILS), Khrunichev (KhSC), and Space Systems/Loral (SS/L).

Photo Below: QuetzSat-1 is about 30 feet closer to the camera (it’s on the right) and is rolling to Hall 101, so it looks a lot bigger. ViaSat-1 is on the left and moving to Hall 103A. 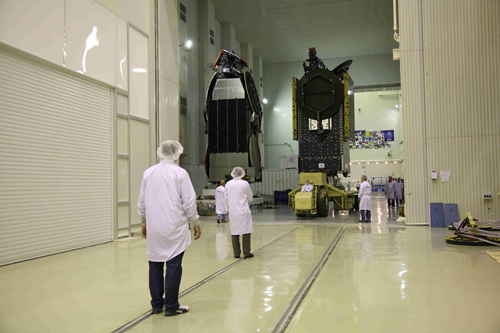