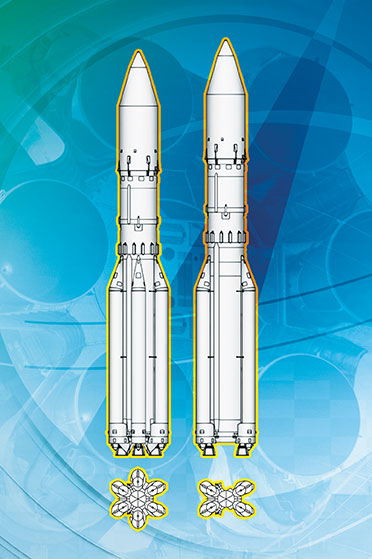 The Proton Variants initial launch capability will be established beginning in 2018 with the “Proton Medium” vehicle launching from Pad 24 at the Baikonur Cosmodrome. The 2-stage Proton Medium Variant will have a 4-meter payload fairing and utilize the standard Proton M configuration with 6 engines on the first stage. It will be followed in 2019 by the “Proton Light” Variant. The 2-stage Proton Light will have a 4-meter payload fairing but feature only 4 engines on the first stage. Both variants will maintain use of the flight proven and time tested Breeze M upper stage for spacecraft insertion.

The new Proton Variant commercial product line development is a result of ILS and Khrunichev working closely with customers and spacecraft manufacturers to find mutually beneficial launch solutions that are optimized for the commercial market, and aligned with its projected growth. “ILS and Khrunichev are utilizing the robust capability of the Proton Breeze M vehicle to better align our product offerings with changing market conditions while at the same time lowering its cost with a service that can address the entire commercial LEO, MEO and GEO marketplace,” said ILS President, Kirk Pysher. “Over time, the Proton launch vehicle’s performance has been enhanced to keep up with the demand for increased performance to address the trend of satellite mass growth to accommodate the heavy, High-Throughput Satellite designs. Electric and hybrid spacecraft propulsion has changed that trend and our customers have made it clear that they want the benefits of the heritage Proton Breeze M launch vehicle design but need the flexibility and cost benefits to align the vehicle’s performance to current spacecraft requirements,” said Pysher.

ILS Vice President of Engineering and Mission Assurance, Jim Kramer, is responsible for the commercial development of the Proton Variant product line. “The design aspects of the variants were directly derived from the requirements of our customers to include reducing the basic cost of the vehicle, improving the design reliability and addressing the 3 to 5 metric ton satellite performance range. With this in mind, the development of this expanded Proton product line was simplified by restricting the vehicle modifications to minimize changes to existing Proton propulsion and guidance, navigation and control (GNC) systems while making full use of the heritage flight-proven elements of the Proton Breeze M system. This is achieved through the elimination of the existing 2nd stage, minor lengthening of the remaining two booster stages and no modifications to the Breeze M upper stage. The removal of the existing 2nd stage with four engines for the Proton Medium and the additional elimination of two 1st stage engines and associated tanks for the Proton Light provides a simplified and elegant design solution to reduce cost and increase the design reliability of the expanded Proton product line,” said Kramer.

Khrunichev Director General, Andrey Kalinovskiy noted that “The Proton Variant product line will complement other launch service providers’ offerings to allow additional access to space for global operators, while increasing the addressable commercial market for Proton. Since this new product line is essentially a commercial offspring of Proton Breeze M, Khrunichev is able to optimize the design, production and operational efficiencies and transfer those savings on to our customers.  The variants will be produced for ILS using a commercial specification that will include additional oversight into the design and production of the Proton Variants. This offering will serve customers well, and will help to ensure timely delivery and assured access to space for commercial customer’s assets.”

About ILS and Khrunichev

ILS provides launch services for global satellite operators and offers a complete array of services and support, from contract signing through mission management and on-orbit delivery.  ILS markets the Proton and Angara vehicles to commercial satellite operators worldwide and is a U.S. company headquartered in Reston, VA., near Washington, D.C.

Khrunichev, which holds the majority interest in ILS, is one of the cornerstones of the Russian space industry. Khrunichev manufactures the Proton system and the Angara family of vehicles. The Proton vehicle launches from facilities at the Baikonur Cosmodrome in Kazakhstan, and has a heritage of over 410 missions since 1965. Khrunichev includes, among its branches, a number of key manufacturers of launch vehicle and spacecraft components in Moscow and in other cities of the Russian Federation.  For more information, visit www.khrunichev.com.

The proven Proton Breeze M launch vehicle is a three stage vehicle with a restartable main engine on the Breeze M upper stage. The vehicle has been in service since 1965 with over 410 launches to date for both the Russian Federal government and global commercial satellite operators. Over time, the vehicle has experienced phased improvements with lift capability of up to 6300 kg to reference GTO and 6500 kg to SSTO at 1500 m/s. The Proton vehicle’s Breeze M upper stage allows for optimizing each mission and maximizing projected in orbit lifetime for single or multiple satellites to LEO, MEO, HEO, GTO, GSO and SSTO.