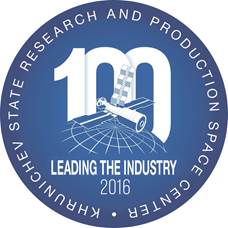 Today, April 30, 2016 marks 100 years since the inception of Federal State Unitary Enterprise "State Research and Production Space Center MV Khrunichev (Khrunichev), one of the core enterprises of the Russian space industry and  one of the world's leading developers and manufacturers of rocket and space technology.

MV Khrunichev considered April 30, 1916 the date when Moscow (Fili) began construction of an automobile plant, named in 1917, the Marshall Center. "The second car factory"  was called Russo-Balt ". In 1927, the plant was named "Plant number 22 of October of the 10th anniversary" and later the factory was renamed the factory number 23. From 1941-1961 is was the "Machine-Building Plant named after MV Khrunichev "-" ZiH ".

The company in its present form, was created on June 7, 1993  by decree of the Russian President as United Heavy Machinery Plant named MV Khrunichev and Design Bureau "Salute". The aim of the association was to improve the efficiency of production and foreign trade activities of the leading enterprises of the space industry and to achieve greater penetration of Russian space technology to the international market. The past period has shown that such a union was justified.

The 100-year history of the company can be divided into three periods: the automobile (1916-1923), aviation (1923-1960), Rocket-space (from the end of 1959 to present). Each of them is connected with the most important stages in the development of strategic aircraft, intercontinental ballistic missiles, rockets, space modules and space stations.

Khrunichev's history is one of innovative advances in aviation and space technology, promoting the progress of all mankind. It is also the story of more active participation of Russian space technology in the international market with the implementation of international space programs, conservation and strengthening its leading position in the development and use of outer space for the benefit of man.

Most important in this story are the Khrunichev people and their business and creative accomplishments. Several generations of scientists, designers and engineers have enabled the development and introduction of advanced technologies and innovative solutions.  .

The dedicated employess of Khrunichev have enabled the development and deployment of the following product lines over the course of the 100 year history:

– The world's best strategic bombers and high-speed M-4 and M-3, standing on the arms,

– Supersonic aircraft M-50, many years ahead of its characteristics their foreign counterparts;

– A high degree of readiness with a long service time, intercontinental ballistic missiles – UR-100, 15A30, etc., standing still in service.;

– Boosters heavy class "Proton-K", "Proton-M", completed more than 400 starts for the removal of the orbits of payloads;

– The new upper stage "Breeze-M" (for "Proton-M"), "Breeze-KM" (for RN "Rokot"), "12 BEF" on oxygen-hydrogen propellant components (for Indian RN «GLSV») that are composed of said pH used for spacecraft and interplanetary stations on different trajectories;

– Modules of the Russian segment of the ISS, on which work began in 1998 with the launch of the module "Zarya", developed by KB "Salyut";

– A considerable backlog and the real experience of operating small satellites for Earth observation (the "Monitor-E") and the establishment of communications systems ( "KazSat", "AI Express" and others.);

– As well as to carry out a successful flight tests in 2014 at the cosmodrome Plesetsk rocket Light ( "Angara-1.2") and in 2015 the heavy ( "Angara-A5") class of unified range rocket "Angara" modular design, based on the universal rocket modules URM URM-1 and-2; successfully tested URM-1 in three start-ups as part of the South Korean CR "KSLV-1."

Currently, space technology and Khrunichev technology are widely used to implement projects on Earth study, exploration and use of outer space for the benefit of Russia and other countries. The company has nearly 20 years of successful experience in the market of commercial launch services under the auspices of International Launch Services (ILS) for the launch of spacecraft for various purposes. Among the customers and partners are national space agencies, aerospace organizations and industrial enterprises from dozens of countries.

Khrunichev will continue to provide, for many years to come, the most advanced technology and equipment, which should provide greater efficiency, productivity growth and high quality products.