The first Angara LV is on pad at Plesetsk Cosmodrome

25 June – Today the first integrated launch vehicle of the Angara-1.2 family  was transferred to the launch complex at the MoD State Testing Cosmodrome (Plesetsk Cosmodrome) in the Archangelsk Region. Angara-1.2ML (“Maiden Launch”) was installed on the launch pad.

The go-ahead for the roll-out was given by the State Commission for Flight Testing of Spacecraft Launch Systems at its meeting on Tuesday, June 24.

The launch of the light-lift Angara-1.2ML is scheduled for June 27 and begins the flight tests of launch vehicles belonging to the latest Russian Launch System, Angara.

The purpose of the Angara-1.2ML launch is injecting Stage 2 and a mass/dimensional dummy payload, the latter not to be separated, to a ballistic trajectory. The stack is subsequently expected to reach its targeted impact area in the Kamchatka Peninsula. 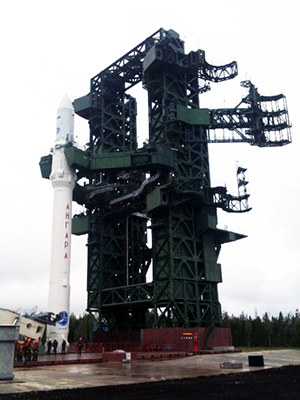