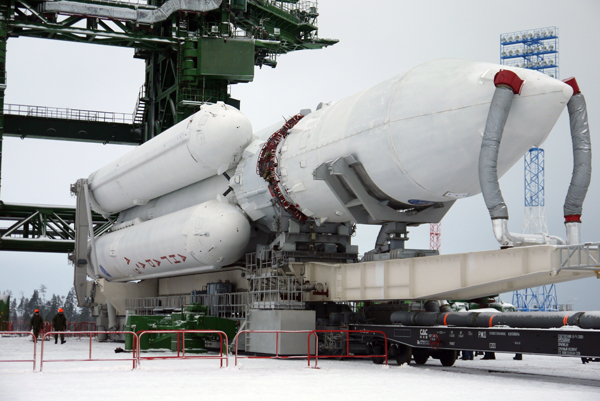 MOSCOW, Nov. 14, 2018 – The following is a press release from Khrunichev Space Center: Khrunichev Center plans to make the second flight-ready heavy-lift Angara-A5 launcher available for shipment from the factory to the Plesetsk Cosmodrome for the second test launch in April 2019.

Currently, the structural components of the LV are being tested.

Roman Khokhlov, Khrunichev Center Deputy Director General for Production, stated: “The Russian Ministry of Defense will make the decision regarding shipping the vehicle to the Cosmodrome and the launch date based on the test results.”

The Angara Launch System is designed for launching eco-friendly LV’s of various classes.  The Angara rocket family includes the light Angara-1.2, the medium Angara-A3, the heavy-lift Angara-A5 (upgraded variant of the A5M), and the Angara A5V with increased lifting capacity and an oxygen/hydrogen upper stage.

The Angara variants are built using oxidizer/kerosene fueled Universal Rocket Modules (URM) manufactured by Khrunichev Center.  The URM is a ready-made structure that includes oxidizer and fuel tanks and an engine compartment.  The number of URMs used on the first stage determines the lifting capacity of the launch vehicle.